Share All sharing options for: Joey Logano turns the tables on Kyle Busch to win at Kansas Speedway 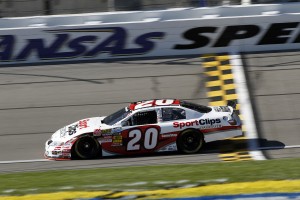 But Logano got past Busch on a restart with five laps to go and held off Busch and Brad Keselowski to win for the second time this season.

"Man it’s cool to get back to victory lane," said Logano, who last won in the Nationwide Series at Kentucky in June. "We’ve been finishing second lately. It’s cool to get on a hot streak right now. I’m pretty excited about it."

With five laps to go, Busch held the lead, with Logano second on the inside on a restart. But Logano’s No. 20 Toyota forced Busch’s car up the track in turns 1 and 2 to get the lead. The yellow immediately waved again for Aric Almirola’s crash, and Busch showed his displeasure over Logano’s move by bumping him just after the caution came out.

"I had three restarts with Joey and was on his outside, and it worked every time," Busch said. "It was just that that restart, Joey forced me a little bit high getting into 1, and I got marbles on my tires. The thing wouldn’t turn on the entry to 1, and then I drove across the middle of the turn and kinda got to his right-rear corner, but he just kept sliding up the track, not worrying about what was outside of him or my run that I had coming on the outside. I just had to lift, gather it back up and get back in line."

Logano said that was the only move he could make.

"When I was on the bottom on the (next-to-last) restart, somebody yelled, ‘Clear,’ so I was like, ‘I’ve got to clear him and come up the race track before (Busch) gets to the outside of me,’ because he would’ve had me in 3 and 4," Logano said. "But I was clear at the time. I left him a little room up there, but his tires just got a little dirty up there."

On the last restart with two laps to go, Logano took the outside and got a shove from Keselowski into Turn 1 to inch away from Logano.

"(Keselowski) helped me out a lot, which was perfect because I pushed him to a couple wins," Logano said.

Busch got by Keselowski and closed on Logano but couldn’t get close enough to make a move.

Keselowski slipped past Busch for second place coming to the checkered flag, with Busch finishing third.

Logano chose the outside lane for the final restart but wasn’t too worried about retribution from his teammate.

"That was a tough decision there," Logano said. "I started on the bottom the whole time. I figured I had to start at the top because every (leader) started up there all day. The last time I was put in that situation was California. I was thinking about it. I got beat that race, so I was like, ‘I’ve need to win this thing, starting on the outside.’"

The race went green for the first 67 laps but then saw six cautions over the next 66.

Trevor Bayne, 19, joined Roush Fenway Racing from Diamond-Waltrip Racing but struggled in his first race in the No. 17 Ford, finishing 30th.