Share All sharing options for: Patience pays off for Ricky Stenhouse Jr. and Roush Fenway Racing 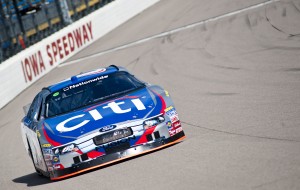 Raise your hand if you thought Ricky Stenhouse Jr. would be leading the Raybestos Rookie standings with six races left in the 2010 NASCAR Nationwide Series season.

You really thought Stenhouse — he of the five Did Not Finishes (DNF) in the first 12 races, he who posted a Did Not Qualify (DNQ) for Race No. 13 at Nashville Superspeedway and he who was benched by team owner Jack Roush at Kentucky Speedway — would not only lead the rookie rankings, but would be one of the hottest drivers in the series at this late stage of the year?

In perhaps the most stunning turnaround of the season, Stenhouse – who celebrated his 23rd birthday last Saturday with a sixth-place finish at Kansas Speedway, the highest among series-only regulars – has overtaken Brian Scott for the rookie lead by five points.

It was 15 races ago, following a 26th-place finish at Road America, that Stenhouse faced his largest deficit in the rookie rankings. He trailed Scott by 35 points. He was predicted to finish second to his Roush Fenway Racing teammate, Colin Braun in a preseason media poll.

Since that race, Stenhouse has resurrected his season. His average finish in the subsequent 13 races is 13.4. He’s registered three top 10s in his last four races, including a top-five finish at Richmond International Raceway. (Stenhouse didn’t run at Watkins Glen, ceding to Roush Fenway Grand Am driver Billy Johnson).

"We have been running well lately and we’ve got to keep it going," said Stenhouse. "With the way the season has been going for us, it’s about time we are showing our potential. It means a lot to me that Jack (Roush) has supported me and this team throughout the season. Winning the Raybestos Rookie of the Year would be a huge honor and it’s something I want to deliver to Jack and all the guys on this No. 6 team. To join the likes of Greg Biffle, Matt Kenseth and Carl Edwards as previous rookie winners would be awesome. These guys are not only great drivers but they are great teammates to have at Roush Fenway Racing."

He’s got some work to do to keep that improvement intact at Auto Club Speedway, where he finished 39th in February after an accident ended his day.

"This sport is all about performance, and at the beginning of the season Jack was wondering about our performance and had the right to do so," Stenhouse said after Kansas. "And here lately, I feel like our performance has definitely turned around for the better.

"It’s definitely a distraction, definitely worried about it," he said of the different Roush Fenway drivers throughout the season. "But I feel like if we keep going and having runs like we have been, I think it’ll take care of itself."

Stenhouse may have a ―secret weapon that’s fueled his resurgence, which could bode well for him in 2011. The introduction of the NASCAR Nationwide Series new car in select races this year has been a huge positive for the Olive Branch, Miss., native. To him, the new car handles more like an ARCA car, his previous series before moving to NASCAR. In the three new-car races to date, he’s finished of third at Daytona International Speedway and 13th at Michigan International Raceway in addition to fourth at Richmond. The final new-car race is Oct. 15 at Charlotte Motor Speedway before full introduction in 2011.

VIDEO: Ricky Stenhouse Jr. says it would be an honor to win the Raybestos Rookie of the Year title