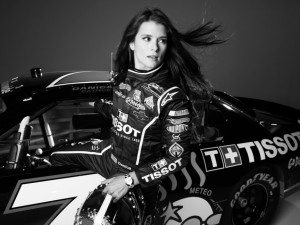 WEEHAWKEN, N.J. (Oct. 4, 2010) -- Tissot, a manufacturer of Swiss watches since 1853, announced that it has reached an agreement with JR Motorsports as a sponsor of Danica Patrick's No. 7 NASCAR Nationwide Series entry through the 2011 season.

The arrangement for the 2011 Nationwide season includes a Tissot primary sponsorship at the Chicagoland Speedway race and an associate sponsor at all of Patrick's other races.

Patrick, who has been a Tissot brand ambassador since 2005, continues to race full-time in the IndyCar Series. She made her much anticipated crossover to NASCAR by signing with JR Motorsports prior to the 2010 season to run a limited schedule in the Nationwide Series.

"Danica brings the racing prowess and crowd appeal she cultivated on the IndyCar circuit to the world of NASCAR," said Sharon Buntain, president, Tissot, U.S. "We are proud to expand our association with Danica, who has been a terrific ambassador of Tissot watches. We are also excited about our new partnership with JR Motorsports, Dale Earnhardt Jr. and Kelley Earnhardt. Danica, Dale, Kelley and Tissot champion the same values of cutting edge technology, precision and innovation. It's a great fit and we can't wait to see the No. 7 Tissot Chevrolet in action."

The 28-year-old Patrick said she is thrilled about Tissot becoming a sponsor of her NASCAR Nationwide program and looks forward to promoting Tissot timepieces including the Danica Patrick Limited Edition Glamsport watch.

"I have enjoyed an outstanding relationship with Tissot and am thrilled to see the company as one of the major sponsors on our No. 7 JR Motorsports Chevrolet," said Patrick. "I love the Tissot watches -- they're sporty, sophisticated and have style. I am proud to be a Tissot ambassador and look forward to driving the Tissot Chevrolet in Southern California."

Kelley Earnhardt, co-owner and general manager of JR Motorsports said, "We are truly excited to welcome Tissot into our partnership family. Tissot has a longstanding tradition of quality and craftsmanship, and we hope to offer them additional success with Danica Patrick on the racetrack. This is a partnership that makes a lot of sense, and one we’re extremely proud of."

Even before taking her first competitive laps in a NASCAR stock car, Patrick had etched her name in motorsports history. With her fourth-place finish in the 2005 Indianapolis 500, she became the highest-finishing woman in the prestigious event, besting the previous record of ninth set by Janet Guthrie in 1978.

Patrick won IRL’s rookie of the year in 2005 and was named the series’ most popular driver. She changed the record books again in 2008 when she became the first woman to win an IndyCar race, taking the checkered flag in the Japan 300 at Twin Ring Motegi.