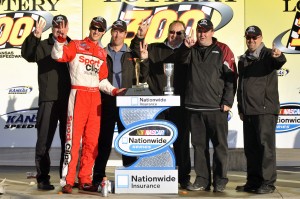 This marks the seventh time that Toyota has earned a NASCAR manufacturer’s title since its NASCAR debut in 2004.

Last year, Toyota captured its second straight NNS title, and in each of the past four years (2006, 2007, 2008 and 2009) Toyota has won the manufacturer’s championship in the NASCAR Camping World Truck Series (NCWTS).

Camry Nationwide Series drivers have combined to produce 15 victories, 62 top-five finishes, 123 top- 10 results and 15 pole positions in the first 29 events of the 2010 season.

"Toyota’s accomplishments in the NASCAR Nationwide Series are the result of countless hours of hard work and dedication by all of our race teams and engine builders working in conjunction with TRD, U.S.A. (Toyota Racing Development)," said Lee White, TRD’s president and general manager.

"All the race team members and everyone at TRD spent countless hours in producing the new Nationwide Series car for this year along with maintaining the superior performance of our existing cars. To earn a third consecutive manufacturer’s championship in this competitive series is a testament to the teams, sponsors, drivers and team members that are a part of the Toyota Nationwide program."

Along with JGR’s 14 NNS wins this season, JTG-Daugherty Racing earned a triumph in August with Marcos Ambrose behind the steering wheel at New York’s Watkins Glen International road course.

"It is an honor to be such a big part of Toyota’s third manufacturer’s title in the Nationwide Series," said Busch. "Joe Gibbs Racing and Toyota have formed a great relationship and it shows through the success of our Nationwide Series program in this record-breaking season."

A total of 33 different drivers have participated in the Nationwide Series in a Camry this year, including Jason Leffler - who has started every Nationwide Series race since Toyota entered the series in 2007 (134 races).

Since joining the Nationwide Series in 2007, Camry drivers have won 52 races and captured 46 pole positions.