Share All sharing options for: Trevor Bayne feels fortunate for chance to keep on the fast track with Roush Fenway 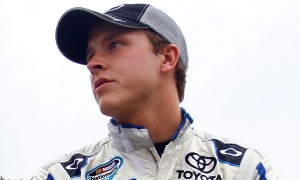 The future of Trevor Bayne continues to look up after signing with Roush Fenway Racing. (Photo: Jason Smith/Getty Images for NASCAR)

NASCAR Nationwide Series driver Trevor Bayne has been on the fast track his entire young life. But the past couple of weeks have been even faster than usual.

"It's been wild, a whirlwind," Bayne said.

Bayne was having a solid first full season in the series with Diamond-Waltrip Racing, winning three poles, and posting five top-five and 10 top-10 finishes in the first 28 races. But a looming contract situation suddenly changed all that.

Bayne and DWR had a Sept. 15 deadline for a contract extension for next season, a deadline he said already was extended once.

"I thought all that was going to affect was my 2011 deal," Bayne said. "That date came around, and the option was for full time in 2011. They came to me honestly and said, 'Hey, we don't have a full season.'"

Bayne said the team asked for another extension to try to find sponsorship or run a partial season. But he wanted to run a full season and didn't think waiting would be a good idea, because all the full-time opportunities would evaporate.

He wanted to stay with the team, especially since co-owner Gary Bechtel personally helped him get to the Nationwide Series full time this season. But then Roush Fenway Racing offered a full-time ride for 2011, and when Bayne told DWR, "that's when the question came in for 2010," he said.

Bayne understands that NASCAR is a business, but the 19-year-old got a rude awakening about how much of a business the sport truly is.

That happened on a Wednesday before the Kansas race, when team vice president and general manager Ty Norris told Bayne he was going to be replaced for the remainder of this season while the team looks to the future.

"I was like, 'Wow, this is crazy. I never saw this happening,'" Bayne said. "But if that's how it is, that's how it is. It's kind of heartbreaking, but I guess that's just business."

The business has a bright side, too, as Bayne found out again. He was once a development driver for Dale Earnhardt Inc. but lost that deal because of sponsorship issues. Bayne then landed at Michael Waltrip Racing.

"Now, it's like, 'Here's an even bigger organization,'" said Bayne, who credits his Christian faith for helping him through this time.

The Roush Fenway deal for this year came together fairly quickly, as the team told him Wednesday afternoon before Kansas that a car was ready for him, which came as a shock to Bayne.

"In all reality, we shouldn't have run any better than we did (30th) for the time given," Bayne said. "First time I ever ran Kansas, first time I'd been with that team, didn't know the day before that I was going to."

Bayne also figures this weekend's CampingWorld.com 300 at Auto Club Speedway "will probably be a little of the same," he said.

The car Bayne will drive already was prepared for Colin Braun for California (the same thing applied for the Kansas race), so Bayne again will drive with a chassis setup not to his liking.

"Hopefully, we can adjust," Bayne said. "I'm sure once we get back to the shop at these West Coast races and kind of settle in, we'll be a lot better off."

Since this is all so new to him, Bayne wasn't sure when the cars will be prepared especially for him, saying it took a year-and-a-half at DWR to get things they way he wanted.

"It can take some time, so I've got to be patient and realize this is for the long haul," Bayne said. "I think this learning curve will be a lot faster than the one at Diamond-Waltrip Racing, just because I kind of know what I'm looking for now."