Press release: KHI announces multi-year sponsorship with Rheem and Menards for the No. 33

Share All sharing options for: Press release: KHI announces multi-year sponsorship with Rheem and Menards for the No. 33

KERNERSVILLE, N.C. (October 29, 2010) - Kevin Harvick Inc. (KHI) announced today the signing of two multi-year sponsorship agreements with Rheem Manufacturing Company and Menards for the No. 33 Nationwide Series entry for the 2011 and 2012 seasons.


Returning to KHI for their fourth and fifth years, Rheem will serve as the primary sponsor of the No. 33 KHI Chevrolet for 22 races throughout each season. 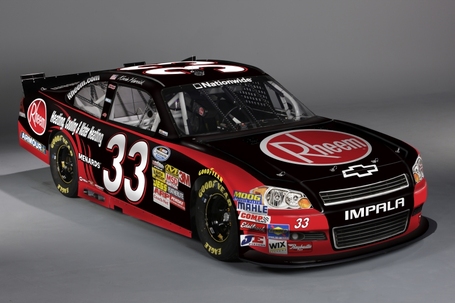 "We're very excited to have Rheem continue its program with KHI and the No. 33 car in the Nationwide Series for the 2011 and 2012 seasons," said KHI team co-owner Kevin Harvick. "Over the last three years, we've watched Rheem increasingly move up their involvement from a few races to now being a major player in the Nationwide Series and one of KHI's most reliable and most active partners. To have participated in their growth and to see them bring new partners into the mix is very exciting."

Fans will not only see two-time Nationwide Series champion Harvick pilot the No. 33 Rheem Chevrolet, but also a variety of RCR drivers will join him throughout the season. Clint Bowyer will debut a new edition of the classic red and black Rheem paint scheme at Daytona (Fla.) International Speedway on February 19, 2011. Having recently announced an alliance with RCR for the Nationwide Series program, the driver line-up for the No. 33 KHI Rheem car is a key example of the important synergies and cooperation among the two companies.

JR Jones, Rheem Chief Executive Officer said, "Rheem's worldwide reputation for quality, reliability, innovation and outstanding service is supported by the business partners we have. We carefully choose our associates based on their equal dedication to performance excellence and their ability to consistently deliver reliable results to customers. Our long association with Kevin and DeLana Harvick and the entire KHI team is a perfect example of quality people and organizations coming together to form one great team."

KHI has also signed a multi-year sponsorship with Menards to serve as the primary sponsor for 12 races in both the 2011 and 2012 Nationwide Series season. Harvick will debut a new yellow and black paint scheme at Phoenix International Raceway on February 26, 2011 for the first scheduled Menards race event. With Menards being the largest consumer supplier in the U.S. of Richmond brand water heating products, one of Rheem Manufacturing Company's quality brands, this will mark the first time that Menards will blend its traditional paint scheme with the classic black Rheem paint scheme to showcase its association with Rheem. Richmond water heaters will serve as associate sponsor of the 33 car for these 12 races. 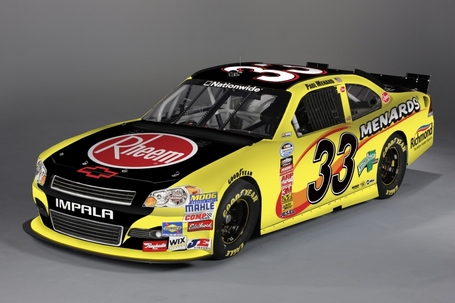 For the Menards races, Harvick will share the driver's seat with Paul Menard and a variety of RCR drivers. This will mark the first time that multiple drivers will pilot the Menards car during a season. Menard has driven the familiar Menards paint scheme in both the Nationwide and Cup series throughout his career and will continue the tradition next season as he joins KHI in the Nationwide Series.