To many race fans, covering NASCAR and its drivers and teams is a dream.

But make no mistake, reporters covering NASCAR work as hard and as long as any sportwriters in the country. Twelve-hour days are commonplace, and instead of covering one or two teams, NASCAR "beat" reporters are responsible for 43 teams.

But they wouldn't have it any other way. Despite the grueling hours and hectic schedules, covering NASCAR can be exciting and rewarding.

We spoke with four of the best, Jenna Fryer of The Associated Press, Jeff Gluck of SBNation.com, Bob Pockrass of SceneDaily.com/NASCAR Illustrated and Nate Ryan of USA Today about covering a NASCAR race weekend here at Richmond International Raceway. You may be surprised at what they have to say.

NASCAR race weekends at Richmond International Raceway are a little different than many tracks. Richmond is a "two-day show," meaning race weekends are compacted into two days. The weekend begins early Friday.

Pockrass is notorious among the reporting corps about being an early riser.

"I'm not a huge fan of traffic, and I have a lot of work to get done," Pockrass said. "And I'm a morning person, so it's not too bad."

He tries to get there when the Sprint Cup garage opens, and the Richmond garage opens around 7 a.m. And the work begins immediately. 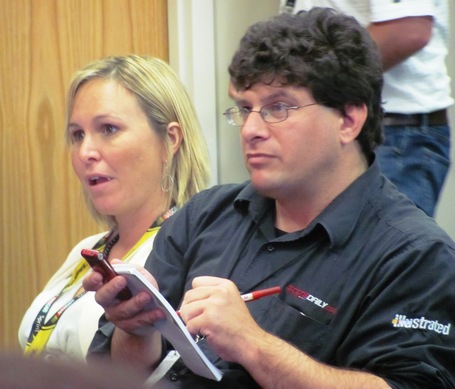 Jenna Fryer and Bob Pockrass are two of the stalwart reporters in the NASCAR garage.

"Sometimes you have to chase some people down, if there's something going on," Pockrass said.

Ryan arrives around 8 to 8:30 to "get the lay of the land" and prepare for media availability of the top 12 drivers in the Sprint Cup standings. NASCAR makes those drivers available to media on every race weekend, either in the media center or behind a driver's transporter.

Fryer and Gluck get to the track around the same time.

"I'm lucky because Richmond is one of the few places where we have another AP staffer within the city," Fryer said. "I have Hank Kurz there, so we split Friday in half. ... I'm no Bob Pockrass, so I get there 30-45 minutes before the first driver availability."

And thus the day is off.

"You would think the media's biggest day is race day," Gluck said. "But really, a lot of media people would find that Friday of race weekend is the busiest because that's when all the drivers are available, and you're running around to these ‘hauler chats.' You have a ton of interviews, and you're talking to a lot of people."

"You spend a lot time at those, and you have to keep track of all the practices going on," Pockrass said. "The (top 12 interviews) are usually going on during Nationwide practice, so you're always trying to keep an eye out to make sure nothing too crazy has happened in Nationwide practice."

When Cup practice starts later in the day, Pockrass writes stories from top-12 Cup interviews or he'll head to the Nationwide garage to check on things.

Reporters are always moving on Richmond Fridays, talking to as many people as possible.

"You're in and out of the media center to the haulers, where it's one of the harder tracks to hear," Fryer said. "You're back in to the media center to hear guys in there, back out to haulers, chasing the people you need to chase outside of the top-12 drivers. There and Bristol are two of the tracks where I feel like it's just non-stop from start to finish. It's wall-to-wall action."

Fryer works on APNewsNow updates, 130-word stories that are sent to the AP wire immediately.

"I'm constantly cranking out these two- and three-paragraph informational updates," Fryer said. "And when you have some time to breathe, you go back and flesh those out into sidebars. And then you do a main story on Friday as well."

Kurz writes the Cup qualifying and Nationwide race stories on Friday, so Fryer is spared those two events. Other reporters aren't.

After the Cup practice, reporters may have to check if anyone needs to go to a backup car should someone wreck. And then there are more top-12 interviews.

"And you may also have some interviews scheduled for a feature you're working on, although Friday at Richmond is so busy, you usually don't plan on that very much," Pockrass said.

Between going to and from interviews, doing the interviews, working other sources, transcribing interviews and writing stories, there is no "breathing time," Fryer says, for any productive reporter. 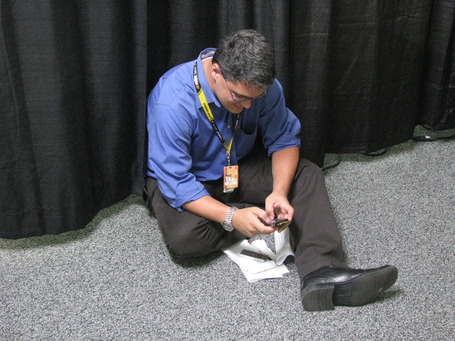 Sometimes reporters like Nate Ryan have to find any place they can to work.

"Those two-day, night-race shows like Richmond and Darlington, that Friday is usually jam-packed with stuff," Ryan said. "The schedule is so compacted that it is like a 12-hour fire drill where you never really get time to breathe - which is fun. When you compare that to sitting around during a rain delay, it could be worse. Sometimes it could be frustrating because there's so much stuff layered on top of each other that it can be a little counter-productive.

"When I used to work at the Richmond paper, it was even more of a rush. I can remember the seven years I worked with the Times-Dispatch, I did more than a dozen race weekends. They were the biggest adrenaline rush I've had in my life. It would be 48 hours of non-stop madness, and I loved every minute of it."

The day continues with Nationwide and Cup qualifying, as well as the Nationwide Series race. Through all the writing, reporters' jobs have changed with the 140-character technology called Twitter.

"It's transformed it almost 100 percent," Ryan said. "Not only do I get a big kick out of Twitter, but I utilize it to the fullest. It's given me a new outlet for, one, being able to disseminate news and tidbits to readers, but, two, it's also given me a way to put my spin on things."

Ryan doesn't write columns, but he does some news analysis via Twitter. Followers do get some news via Twitter, but race fans want a little more.

"You need to be accurate, but you need to get things done quickly," Pockrass said. "But you also need to give people perspective. A lot of people already have 140 characters of the story. You need to take it further than that. They already know somebody finished first or somebody wrecked. They want to know why."

Fryer said Twitter is a way for reporters to keep abreast of the depth and the width of the sport.

"You cannot be everywhere at once," Fryer said. "But Twitter has made it so that everyone knows everything that is going on. And you can scramble."

Twitter isn't simply online any longer. Gluck was one of the pioneers of NASCAR "Tweet-ups," where fans, media and others gather on race weekends to talk about the sport.

"We have some of the best Tweet-ups in Richmond," Gluck said. ‘If anyone's reading this story on race weekend and want to come to the Tweet-up, they should definitely come. We have some of the biggest and best crowds, and Richmond as a track is really involved. They have a good social media presence. Richmond fans are really engaged on what's going on and are really knowledgeable."

Tweet-ups have become the favorite part of Gluck's job, as he enjoys hearing opinions from the fans.

Tweet-ups usually are planned for race day, which at Richmond happens on Saturday.

Fryer calls race day at Richmond "money day," because that's when the "money people" come to the track. Many team owners and executives only come on race day, so that's when reporters scramble to find them and ask them questions.

Race day starts a little later for most reporters, though Pockrass is usually there at 10 a.m. catching up on the previous day's work. Other writers come to the track between 1 and 2 p.m., not long before the Cup garage opens.

"You spend the time from when you get there until the drivers meeting trolling the garage, looking for the people who you know come on race day only," Fryer said. "That's not as intense a writing day, as much a chasing day, a networking day. You do spend a little more time having conversations."

"But don't try to find anybody while the Kentucky Derby is going on because you're not going to find them," Pockrass said.

"And when the fans are going home, you're the busiest," Gluck said. "You're running around, trying to get the drivers before they try to take off for home themselves. Usually, the media stays about three hours after the race writing their stories. The bad thing is it's late at night, but the good thing is most of the traffic is usually cleared up by the time you're done."

"When the race ends is when your real job begins," Fryer said.

And though it may be crazy on race weekends, all four say they wouldn't trade it for any other job.

"This can be a grueling schedule and a grind at times, but I would never complain about my job," Ryan said. "I know we're all very lucky to have them. We're not digging ditches, and for most of us, we're doing what we love."